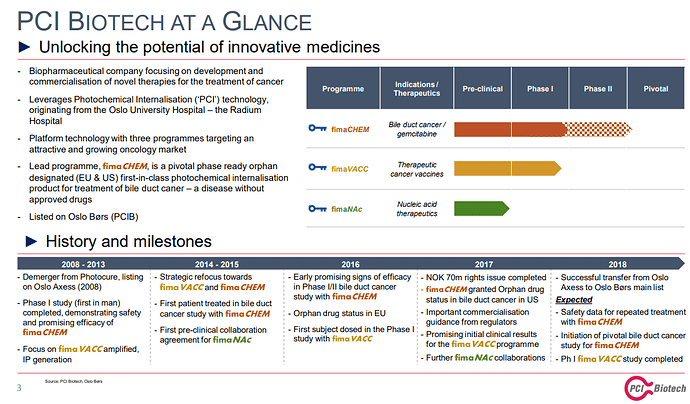 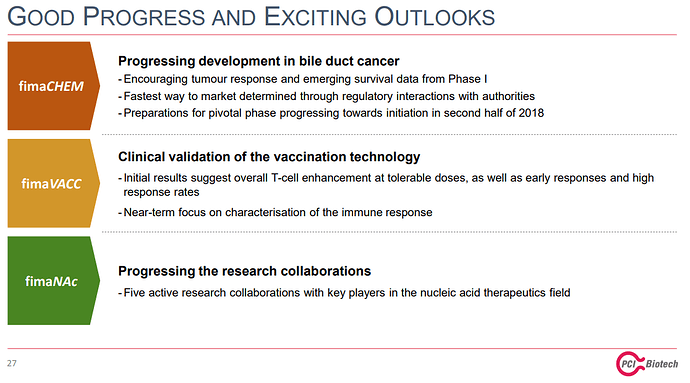 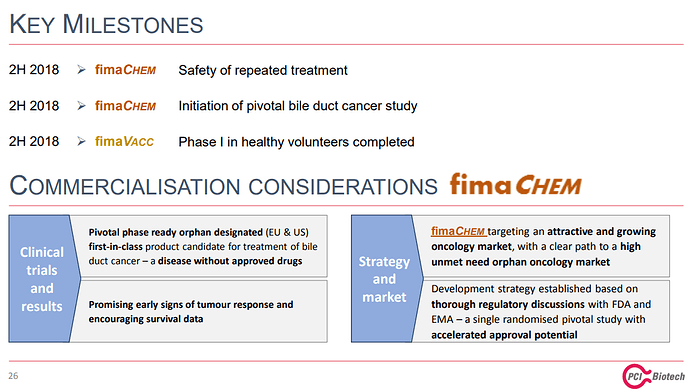 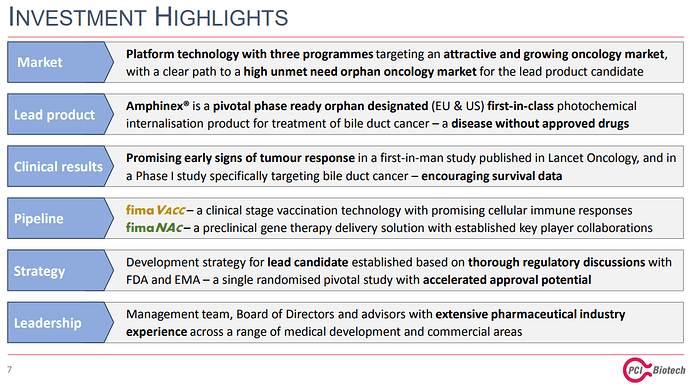 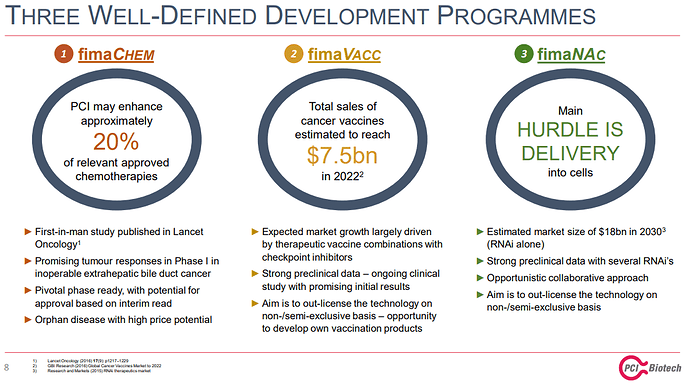 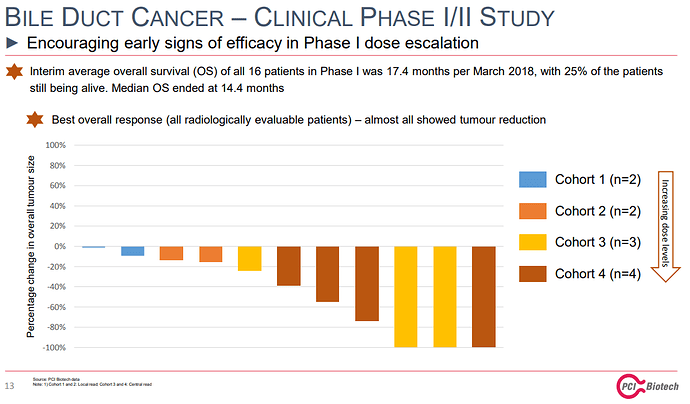 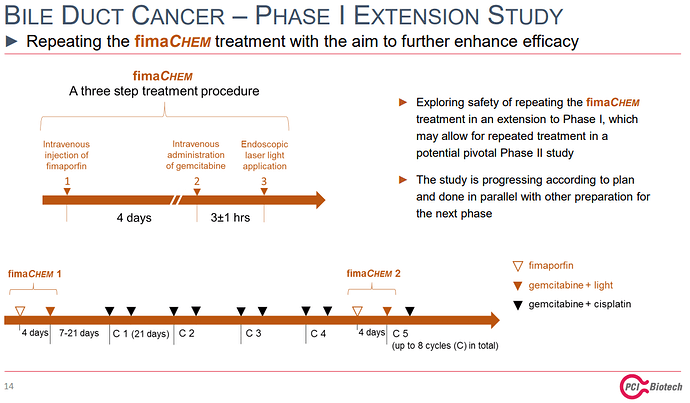 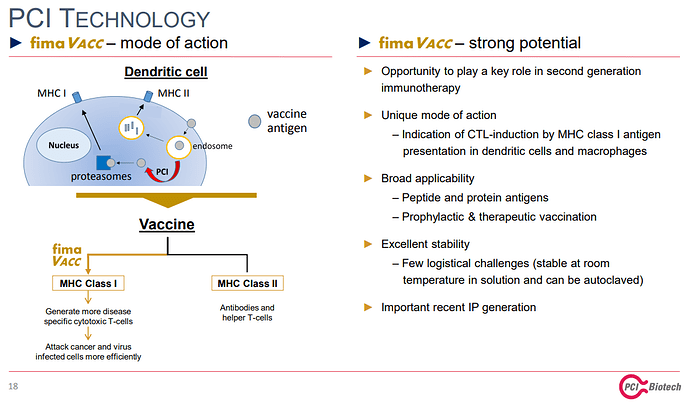 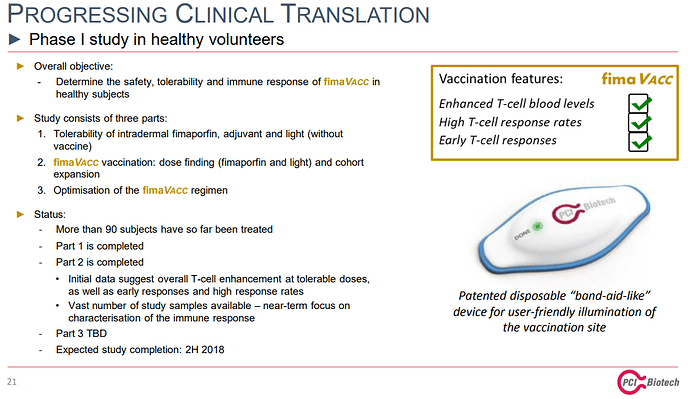 The reason why i think this will have fresh data is because H. Olivecrona is a co-writer

This is the link for the program, Pci biotech is in page 182. you will also find in the same page other posters from the industry related to bile duct cancer including a poster about FOLFIRINOX

A post was merged into an existing topic: PCI Biotech Småprat (PCIB)

Photochemical internalization (PCI), a derivative of PDT, has been shown to increase the efficacy of drugs, gene transfection as well as a variety of other anti-cancer agents that are taken up into cells by endocytosis[29-33]. PCI is based on the use of specially designed photosensitizers, such as AlPcS2a, TPPS2a, TPcS2a that localize preferentially in the membranes of endocytic and lysosomal intracellular vesicles. Upon exposure to light of appropriate wave lengths, the photosensitizers induce the formation of short range singlet molecular oxygen, destroying the intracellular vesicles membranes, thus leading to the release of the contents of these vesicles into the cell cytosol. The released macromolecules can now exert their full biological activity instead of being degraded by lysosomal hydrolases.

Norum et al.[34] (2017) has examined the efficacy of PCI delivery of bleomycin (BLM-PCI) and its impact on systemic anti-tumor immunity in an extra-cranial mouse model. Their results showed that both PDT and BLM-PCI were incapable of inducing a curative effect in athymic mice at the light dose tested. In contrast, 50% of the light dose of that used in athymic mice resulted in a curative effect in 90% of the animals after BLM-PCI and 70% after PDT in normal mice. Inhibition of tumor cell growth was observed when combined with co-injection of splenic T cells from mice treated and cured with BLM-PCI. The anti-tumor immunity induced by BLM-PCI was equal to that obtained with PDT treatment, but at a lower light dose. Furthermore, the induced immune response after BLM-PCI was sufficient to reject tumor re-challenge immediately after PCI and lasted for at least two months.

An additional and novel method for enhancing the efficacy of peptide vaccines in extra cranial studies has been explored by Haug et al.[35] (2018) utilizing PCI to promote the escape of trapped endocytosed peptides into the cytosol of APCs. Their results showed that PCI caused a 30-fold increase in MHC class I/peptide complex formation and surface presentation on APCs, and a subsequent 30- to 100-fold more efficient activation of antigen-specific CTLs compared to using the peptide alone. These in vitro effects of PCI were translatable in vivo by the successful induction of antigen-specific CTL responses to cancer antigens in C57BL/6 mice following intradermal peptide vaccination and local light treatment. It is noteworthy that both macrophages and DC were used as APCs with approximately equal efficacy in these experiments. If these promising PCI strategies might be translatable to post-operative HGG treatment by the use of indwelling balloon light applicators, as has been proposed and tried for both radiation and PDT treatment, remains to be determined[36-39].

PDT for the treatment of brain tumors

PDT has been investigated as an adjuvant for the treatment of malignant gliomas for approximately 35 years[39-43]. Although numerous clinical trials have been initiated, the vast majority have consisted of uncontrolled phase I/II studies containing small numbers of patients. For example, in the single center phase III trial reported by Eljamel et al.[39] using both flourecent guided resction combined with ALA and Photofrin repetitive PDT, a mean overall survival (OS) of the treatment group was 52.8 weeks compared to 24.6 weeks in the control group. In a phase II uncontrolled trial of 22 patients reported by Muragaki et al.[41], using talaporfin sodium as a PS, a median of survival of 99 weeks was observed. This compared favorably to the 54-64 weeks OS obtained from previous trials employing standard post operative treatment consisting of radiation and TMZ. Due to differences in methodology and types of malignant brain tumors treated, it has been very difficult to evaluate PDT efficacy from these limited trials. For a more detailed account of the results of a number of PDT clinical trials for HGG, Bechet et al.[42] and Quirk et al.[43] give an excellent overview. Additionally, none of these clinical trials have included an evaluation of the effects of PDT on the immune response to treatment. Overall, the results of PDT trials for malignant gliomas have been relatively modest, thus providing the rationale for alternative PDT mediated treatment approaches such as PDT induced immunotherapy"

Although the experience with PDT/PCI produced anti HGG vaccines is limited and no clinical trials have been done, PDT/PCI appears to be an inducer of immunogenic cancer cell death, an important step in the afferent phase of the immune anti-tumor response. Light activated induced immunotherapy therefore holds the potential to become a complementary therapeutic option for for patients with HGG. Taking into account the penetration limitations of light activated therapies in the brain the further development of ex vivo PDT/PCI generated APC or peptide vaccines seems the most attractive approach. A deeper and detailed understanding of the induction of the antitumor immunity induced by light activated therapies would allow in the defining of protocols which would focus and enhance the immune system to recognize and prevent the inevitable post-operative recurrence of the tumor. Combining PDT induced anti-tumor vaccines with other therapeutic modalities including check-point inhibitors, is an exciting field to explore. Although not discussed in this review both PDT and PCI have an effect on the vasculature and have been show to temporarily open the blood brain barrier in a limited site specific region[66-68]. What additional role this would play in the development of an effective and safe anti-HGG patient therapy, remains to be established.

“A common understanding has been reached on several important factors for a pivotal study with fimaporfin in inoperable cholangiocarcinoma, including the sufficiency of a single randomised two-arm study and importantly, the potential for accelerated/conditional approval based on interim results.”

PCIB har ikke AAP, men de er i helt ordinære samtaler med FDA som andre selskaper. Som FDA skriver:
“The sponsor should ordinarily discuss the possibility of accelerated approval with the review division during development, supporting, for example, the use of the planned endpoint as a basis for approval and discussing the confirmatory trials, which should usually be already underway at the time of approval”.

In brief, the collaborators will evaluate technology compatibility and synergy based on in vivo studies. The companies will evaluate results achieved from this research collaboration and then explore the potential for a further partnership.

Per Walday, CEO of PCI Biotech, said: .I.m very pleased to announce another research agreement with a key player within the field of immunotherapies, which is the second collaboration initiated this year. We believe that the PCI technology has the potential to play a role in the realisation of several new therapeutic modalities, and we look forward to explore synergies with Bavarian Nordic.s unique and innovative technologies…

Oslo, 20 December 2017 - PCI Biotech (OSE: PCIB), a cancer focused
biopharmaceutical company, today announced preliminary outcome of regulatory
interactions with the European Medicines Agency (EMA) and the U.S. Food and Drug
Administration (FDA) on the development of fimaporfin in combination with
gemcitabine for treatment of inoperable cholangiocarcinoma (bile duct cancer).
The purpose of the interactions is to discuss the development programme for
fimaporfin, including the design of a pivotal study to support future marketing
authorisation applications in EU and the USA.

A common understanding has been reached on several important factors for a
pivotal study with fimaporfin in inoperable cholangiocarcinoma, including the
sufficiency of a single randomised two-arm study and importantly, the potential
for accelerated/conditional approval based on interim results. The required
randomised study will provide the opportunity to generate robust comparative
data of importance for market acceptance of fimaporfin as a first line treatment
of inoperable cholangiocarcinoma. The implications of an interim analysis for
the final pivotal study design will require further discussions with regulators.

Dr Per Walday, CEO of PCI Biotech, said: “With promising efficacy results
generated so far, orphan drug designations granted and guidance from regulators
and key opinion leaders, we are focused on finalising the preparations for the
pivotal randomised adaptive study. Patients with inoperable cholangiocarcinoma
have no approved treatment alternatives today and fimaporfin has the potential
to play a role in this area of high unmet medical need. We are therefore pleased
that the regulators are open to a potential approval based on interim results”.

Further information on the study, which is planned for initiation during the
first half of 2018, will be announced following completion of discussions with
regulators and clinical advisors.